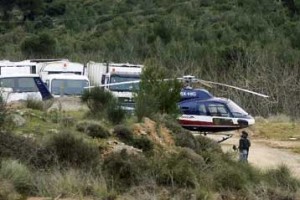 Two of Greece’s most wanted men have staged a daring helicopter escape from Athens’ highest-security prison – for the second time in three years.

Serial armed robber and kidnapper Vassilis Paleokostas and his Albanian sidekick Alket Rizai were days away from trial for their 2006 escape.

They fled Korydallos prison after a helicopter landed on the jail’s roof and threw them a rope ladder.

The aircraft was reportedly later found abandoned by a main highway.

The road leads towards Greece’s central mountain range, an area where Paleokostas, 42, was able to hide with impunity during previous years, says the BBC’s Malcolm Brabant, in Athens.

Our correspondent says the breakout is a damning indictment of Greece’s prison system.

Sunday’s escape happened at around 1530 local time (1330 GMT), the Associated Press reports, adding that guards opened fire on the fleeing fugitives but were unable to stop them.

«The helicopter was then found in the northern Athens suburb of Kapandriti but there was no trace of the fugitives,» an unnamed police official told Reuters news agency.

Three years ago both men managed to escape when a hijacked helicopter landed in Korydallos’ central yard at exercise time.

On that occasion, the guards failed to react, because they thought it was a visit by prison inspectors.

Paleokostas was previously in prison for a string of crimes including the kidnapping of an industrialist called George Mylonas, released after paying a substantial ransom.

After the previous escape he was recaptured in August 2008.

The architect of that escape, Paleokostas’ brother Nikos, has since been captured and jailed, and is now likely to face increased security.