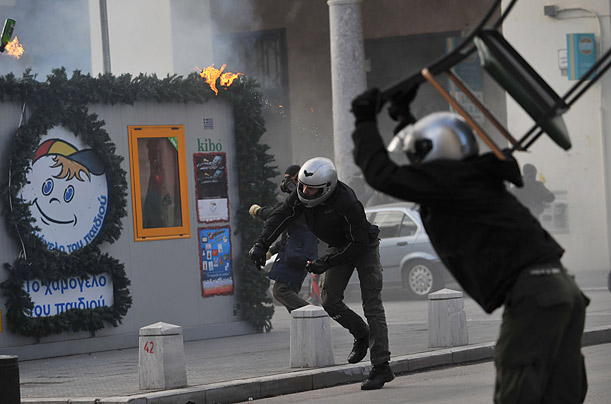 ATHENS – The violence in Greece by youths angry over the killing of a teenager by the police raged for a third day on Monday as thousands of police officers failed to contain some of the worst rioting in recent years.

A major street march through the center of downtown Athens quickly turned violent Monday night, as demonstrators threw concrete slabs, rocks and flaming gasoline bombs at police officers. A Christmas tree set up by the government in the center of the city was set on fire.

Schools were shut in Athens, the capital, and high school and university students spilled onto the streets, leading to scattered violence throughout the day. But the evening demonstration, which had attracted thousands and was organized by the nation’s Communist Party, was accompanied by some of the worst of the violence of the past several days, and bystanders said they were growing more frustrated with the police’s inability to stop the riots.

The windows of one of Athens’ luxury hotels, the Athens Plaza on Syntagma Square, were smashed, and a hotel guard said guests were evacuated. A small fire burned in the lobby of the Foreign Ministry opposite the Parliament building, The Associated Press reported.

Swift action by the government, which charged a police officer with premeditated manslaughter in the shooting death of the 15-year-old on Saturday night, did not ease the rioting, which began a few hours after the boy’s death.

Senior security officials said they had put the country’s entire 45,000-member police force on alert in one of the biggest security mobilizations since Athens hosted the 2004 Summer Olympics. Britain and Australia issued travel advisories for their citizens visiting Athens.

Panayiotis Stathis, an Athens police spokesman, said security forces were «trying to control the situation,» while using restraint in putting down any protests. «The orders decreed to officers is to be tolerant but responsive to any criminal attack,» Mr. Stathis said.

As night fell on Sunday, rioters were barricaded at two university campuses in the capital. The Greek police and military have not been permitted to enter college campuses since 1973, when tanks quashed a student uprising at Athens Polytechnic, leading to at least 22 civilian deaths.

Panagiotis Sotiris, 38, a spokesman for Uniting Anti-Capitalist Left, a coalition of leftist groups which helped take over the Athens Law School on Monday, said in an interview with Reuters that the violence was not only connected to the killing of the 15-year-old boy, «but is a struggle to overthrow the government’s policy.»

«We are experiencing moments of a great social revolution,» he said.

Young people also continued to clash with the police in other cities. In the northern city of Salonika, 300 students fought pitched battles with the police on Monday, overturning scores of trash cans and setting them ablaze. In Veroia, a town about 40 miles from Salonika, an estimated 400 stone-wielding students clashed with the local police, who retaliated with tear gas. In the small Greek town of Trikala, a student protest march turned violent and one policeman was injured.

In Athens, some 15,000 police officers fanned out across the city’s meandering streets, the authorities said. Rebel youth and self-styled anarchists threw rocks at police officers in riot gear and shouted anti-establishment slogans as police countered with rounds of tear gas.

Workers in the capital’s downtown district had returned to their jobs on Monday but expressed anger as they surveyed the damage done by the rioters. Department stores, banks and scores of cars have been destroyed..

«What happened with the teenager was terrible,» said Marina Christodoulou, a teller at a bank destroyed by rioters. «But watching these rebellious youths tear down the town without an inkling of a response from the police makes the authorities look like cowards.»

The details of the Saturday night confrontation that led to the death of the 15-year-old, whose name has not been officially released by the authorities, remained in dispute. The police said two police officers had been stopped by about 30 aggressive youths in Exarchia, a central Athenian district of bars, restaurants and bookstores that is a gathering place for anarchists.

The police said one officer, Epaminondas Korkoneas, fired three warning shots, one of which struck and killed the boy. Greek media quoted witnesses who said the officer had aimed at the boy. Mr. Korkoneas has been charged with premeditated manslaughter. The other officer present has been charged as an accomplice.

An autopsy is being carried out on the boy’s body to determine the trajectory of the bullet that killed him.

«For decades,» said John Brady Kiesling, a former American diplomat in Athens, «there has been a modus vivendi whereby police tolerate certain crime in Exarchia, and anarchists refrain from waging attacks against them. That live-and-let-live attitude has worked well for both sides. But once there is some type of police action, anarchists retaliate massively and leftist-leaning youth gangs rally to their cause of police resentment.»

The anarchist movement in Greece traces its roots to a military junta that ruled the country from 1967 to 1974. Because of the population’s sensitivity to state violence against civilians, the authorities are hesitant to use overwhelming force against them, even when they become violent.

Mr. Kiesling and other analysts contacted Monday suggested that the authorities were holding out against coordinated security operations until a public outcry empowered the police to take action.

With the conservative government stung by a string of corruption scandals and its popularity plummeting in the face of difficult economic conditions, politicians and security officials were weighing the options of a large-scale police operation to uproot radical elements propelling the protests.

«The timing may not be right for such a move,» said Marianna Giannakou, a former conservative lawmaker. «But Greece must move on and end its tolerance of extremism.»

News agencies reported that at least 35 people had been detained around the country since the riots began Saturday. At least 40 people have been injured.

In a televised address on Monday, Prime Minister Kostas Karamanlis vowed to punish violent rioters. «All the dangerous and unacceptable events that occurred because of the emotions that followed the tragic incident cannot and will not be tolerated,» he said. The state, he added, «will protect society.»